Fear and loathing in the land of the spirits

No, this isn’t about Hunter S. Thompson. It’s about the movie I watched last night between the Super Bowl and bed, Hiyao Miyazaki’s “Spirited Away.”

This 2001 Japanese animated movie tells the story of Chihiro, a young Japanese girl who travels into the world of the spirits (or local gods, in the Japanese original) and has to find her way out again while saving her parents, trapped there with her.

The movie’s superficial appeal comes from its plot – redolent of “Alice in Wonderland” and heavily drawing on Campbellian archetypes – and its striking visuals, portraying a fantastic world of spirits, dragons and witches. But what elevates “Spirited Away” above simply very good into superb are the complex themes Miyazaki has woven into his fairy tale.

After all, even thoroughly pedestrian movies have morals and themes. But “Spirited Away” is interwoven with many high-level messages, making it a film you can watch not just to be entertained but also to provoke thought and analysis.

The most evident theme in “Spirited Away” is the selfless-selfish dichotomy. Time and again throughout the movie, selfish acts only lead to trouble while selflessness is almost always repaid in full.

Chihiro’s parents get trapped in the spiritual world, for example, by choosing to indulge their appetite and devour a feast they find lying before them in an abandoned village. Their gluttony causes them to literally tun into pigs.

The workers in the bathhouse of the spirits cause similar problems through their greed for the gold offered by the mysterious No Face. His limitless supply of lucre leads the otherwise haughty spirits to abase themselves, interrupting their sleep to cook No Face food, give him a bath, sing him songs and bow down before them. But No Face devours several of the spirits who get too close to him while searching for gold. In the process No Face grows immensely in power, so that when he loses his temper and goes on a rampage he destroys large parts of the bathhouse.

No Face himself found himself turned from a kind, helpful spirit into a rampaging monster by his own greed, demanding the bathhouse employees serve his every need. It is only when Chihiro forces No Face to give up everything he’s consumed – and his pursuit of more consumption – that he reverts back to his original helpful self. “I think being in the bathhouse makes him crazy,” Chihiro says. “He needs to get out of there.”

In contrast, Chihiro consistently displays a willingness to put others before herself – and every time she does, her selflessness ends up benefitting not just the other but Chihiro. When she helps No Face enter the bathhouse, he repays her kindness by giving her the tokens she needs to operate the baths. Chihiro frees a River Spirit of the junk trapped in him; in return he gives her a magic pellet of significant powers. She then uses this pellet, twice, to help people in immediate need rather than saving it to rescue her parents. In both cases she gains an ally – and her effort to help her parents is advanced, too.

The elusive dragon spirit Haku helps Chihiro twice, once before the movie begins, and again when Chihiro first finds herself trapped in the spirit world. His kindness is repaid when Chihiro frees him from slavery and restores his own identity to him.

There are a few exceptions to this idealized world where selfishness never pays off – the twin witch sisters Yubaba and Zeniba. Yubaba, the main villain of the movie, who enslaves Chihiro and steals her very name, has prospered a great deal by being avaricious and cruel. This does come back to bite her – when she sends Haku to steal a powerful artifact of Zeniba’s it ends up bringing Zeniba into the bathhouse, where she steals away the only person Yubaba loves, her gargantuan baby. But when the movie ends Yubaba is still in possession of her wealth and powers and hasn’t undergone any major change of heart.

Similarly, while the movie sets up Zeniba as the “good witch” to Yubaba’s “evil witch,” Zeniba clearly isn’t afraid to play hardball. When Haku steals her artifact, she places a deadly curse on him and sends a flock of enchanted paper birds after him, nearly killing him. Upon gaining entrance to Yubaba’s quarters she makes mischief, stealing Yubaba’s baby and pet. Though Zeniba is a much kinder – and less greedy, living in a crude shack rather than a palatial bathhouse – person than Yubaba, she suffers no real consequences for her actions. 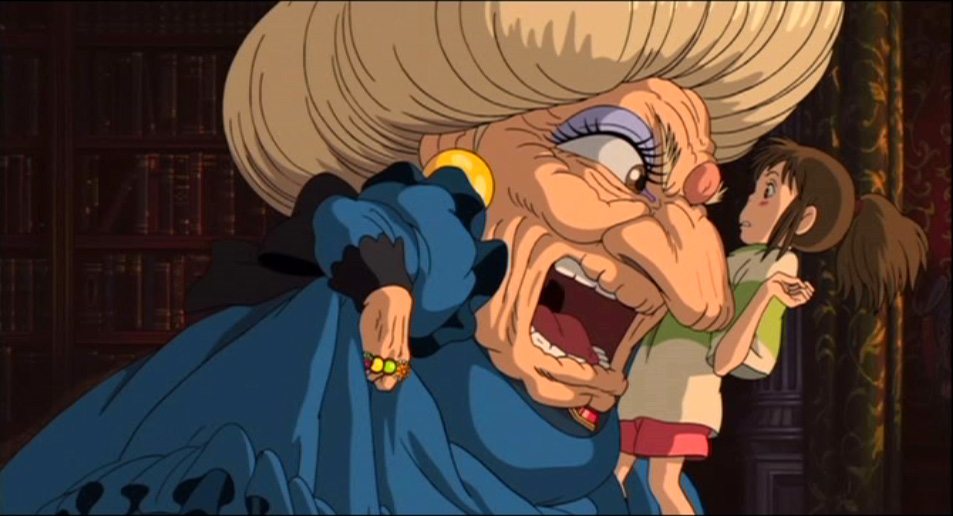 Another fascinating theme in “Spirited Away” is fear – which, like selfishness, doesn’t pay off. Moreover, Miyazaki portrays fear as not only counter-productive but wasteful. It’s impossible, the film shows, to evade that which we fear.

This is demonstrated not once but twice in quick succession early in the film, as Chihiro makes her way into the alien bathhouse of the spirits. Terrified out of her wits by the unfamiliar and dangerous world she finds herself in, we see Chihiro freeze at the top of a rickety staircase along the outside of the bathhouse, overhanging a cliff. Finally, she forces herself to go down the stairs – all but crawling down them, sitting down and sliding down one step at a time. It would take her hours to make it all the way down at that rate – but the third step gives way beneath her, sending her sliding and careening all the way to the bottom in seconds. Chihiro’s fear of the stairs only forced her to face them head on.

Shortly after that, Chihiro finds herself outside Yubaba’s office, unwilling to venture in to face this terrifying witch. When she doesn’t venture in, Yubaba loses patience and uses magic to pull Chihiro headlong through the doors.

In both those cases, fear is somewhat sensible – Chihiro is facing a dangerous situation. But the only way out of the danger is to face it.

Yubaba’s baby is another creature living in fear – fear of germs and the dangers that face him in the outside world. So he stays in his bedroom his entire life, trapped by his fear in the form of a giant petulant infant. Here selfishness plays a role, too – as an infant Yubaba’s baby only demands things from others, demanding care and play and throwing tantrums when he doesn’t get his way. When he’s forced out into the world in the form of a tiny rodent, to confront his fears, he finally begins to mature. He only returns to Yubaba and his normal form when he chooses to – and his first action is to stand up to his mother not through a tantrum but through reason, arguing for leniency for Chihiro.

In contrast, when characters face their fears, they benefit. Her hesitance at the door notwithstanding, Chihiro’s confrontation with Yubaba and unwillingness to give in to threats wins her a job at the bathhouse. By facing Zeniba, Chihiro unmasks her as a kindly old grandmother. Haku forces Yubaba to give Chihiro’s parents back by confronting her head-on. No Face is driven from the bathhouse by neither appeasement nor flight but when Chihiro faces him head-on. 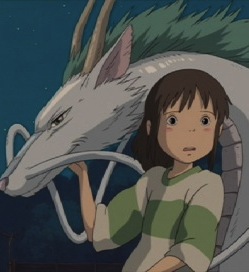 Finally, identity is central to “Spirited Away.” It is by stealing people’s identity that Yubaba controls them. Chihiro’s parents are literally turned into pigs, losing their memory of being human. Chihiro has her own name taken away, being rebranded as Sen. She even begins to forget her own name until Haku reminds her of it.

Haku, too, is missing his name. Only when Chihiro gives him back his identity is Haku freed from Yubaba’s servitude.

The powerful River Spirit has been transformed by pollution into a Stink Spirit, an unbearably malodorous being who sends the bathhouse employees fleeing in terror and disgust. When Chihiro frees him, he reverts to the form of a glorious dragon.

Identity is often lost as a consequence of greed and selfishness. That’s the case for Chihiro’s parents, whose gluttony turns them into pigs. It’s probably the case for Haku, whom characters say sold himself to Yubaba as her apprentice with the goal of stealing her power – only to find himself her slave. A contributing factor to both Haku’s enslavement and the River Spirit’s transformation is selfishness on the part of humans, who pollute the River Spirit’s river and pave over the river Haku calls home. This is part of the broader message Miyazaki is sending about Japaense society – that selfishness and greed is destroying the Japanese people’s identity, chiefly in the form of their connection to the spiritual world.