An amazing year at the movies

No, not 2010, or the upcoming year. Both seem, at the present time, to be pedestrian.

I’m talking about 2006, sparked by my re-watch last night of “Children of Men,” a film released that year. 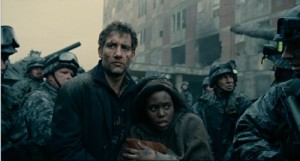 For those (most of you, judging by the anemic box office returns for Alfonso Cuarón’s film) who haven’t seen the movie, it’s a science fiction movie set in the new future in a world where humanity has mysteriously lost the ability to reproduce some 18 years ago. This destruction of humanity’s future has caused a breakdown of society, with Britain surviving only by turning itself into a police state.

Thematically, the movie explores hope and the future, rejecting both those (like Fortress Britain’s rulers) who cling relentlessly to the past and those (like the rebel-terrorist Fishers) who dream only of the “uprising” and bloody overthrow of their enemies. Instead the movie’s heroes are those who hold to their morals and principles and retain hope in the future.

Even more striking than the deft screenplay is the movie’s design – the creation of a decrepit world on the brink of chaos, and the totalitarian reaction to it (including visual references to the Nazis and to Abu Ghraib photos) – and above all its cinematography. Cuarón rejects the herky-jerky jump-cuts of contemporary action movies in favor of smooth, amazingly long single shots (though some were faked, seamlessly stitched together with CGI from several shorter shots).

“Children of Men” got its American release on Christmas Day 2006. A week later came a movie equally as good, from Cuarón’s fellow Mexican director Guillermo del Toro, “Pan’s Labyrinth.” That movie seamlessly blended fairy tales and a brutal war story, and in both the girl Ofelia’s creativity and her father-in-law Vidal’s brutality made a persuasive case against authoritarianism.

Those two movies ranked #3 and #2 on my list of the best films of the past decade. Four other movies from that year also made my list:

Among the excellent (or at least good) movies I’ve seen that were also released that year were:

That’s not even counting “The Departed,” “United 93,” and “Babel,” none of which I’ve gotten around to seeing yet but all of which are highly regarded.

About the only black mark I can see in the year was that it saw the release of the weakest Pixar movie, “Cars” – which itself wasn’t a bad movie, just uninspiring compared to the rest of Pixar’s oeuvre.

Can anyone think of a better year in film, at least in recent memory?