The news yesterday that Dominique Strauss-Kahn, the head of the International Monetary Fund and the frontrunner to be the next president of France, was arrested on charges of sexual assault of a maid in a hotel room, took me back to 2007, where I spent the spring studying abroad in Aix-en-Provence, France. That was the time of a hotly contested French presidential election, and as a political junkie, I followed the election as closely as I could. 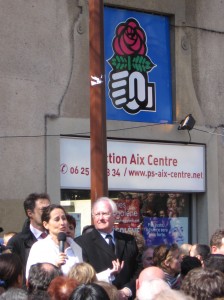 Strauss-Kahn had run for the Parti Socialiste nomination but lost to the young, telegenic Ségolène Royal (who would prove to be an inept candidate and go down in defeat to the winner, Nicolas Sarkozy of the center-right Union pour un Movement Populaire (UMP) party. He was leading the polls for France’s 2012 presidential election before his arrest.

In 2007, I watched the televised debates and the TV news coverage, I read French papers, I collected campaign posters and I enjoyed the political parodies (like this, mocking the contentious public relationship of Royal and her then-husband, Parti Socialiste chair François Hollande with a “Mr. and Mrs. Smith sendup). But the most fun was a project I did looking at campaign songs.

Here in the United States, the once-proud tradition of campaign music has fallen by the wayside. Campaigns instead prefer to use existing pop songs, like “Only In America” and “Signed, Sealed, Delivered I’m Yours.” (The 2008 election was actually an improvement on this lost art, with will.i.am’s famous “Yes We Can” becoming a genuine hit for Barack Obama and John McCain’s campaign using John Rich’s “Raising McCain.”)

The French have a leg up on us in this area.

In 2007, partly out of curiosity and partly to get  content for a mix CD for a friend who also liked French politics, I scoured the internet for campaign songs for the major figures involved in the 2007 presidential campaign. I then fired up GarageBand and produced the following:

That mashup combines six different French political songs, cut up and arranged in some semblance of a narrative.

00:00-00:41 - “Mon pays France,” by David Delimon. This was the official UMP theme song for a 2005 political drive of some sort. Its lyrics espouse the UMP’s center-right political philosophy: “too many taxes, too many handouts.”

00:41-00:51 - “Strauss-Kahn y va gagner,” the official campaign theme song of Dominique Strauss-Kahn’s unsuccessful bit for the Parti Socialiste nomination for the 2007 presidential election. I picked this mostly for the refrain, “à gauche! à gauche!” or “to the left! to the left!” as a counterpart to the UMP song before it. Strauss-Kahn was not a major political player in 2007 after losing to Royal in the PS primary.

00:51-01:23 - “Ségolène Royal Mix,” by Les Gars de la Royal (or “the Royal Guards,” a pun on Ségolène’s name). This is an unofficial pro-Royal song: “She’s a queen, Ségolène,” Les Gars sing. It’s also interesting to note the different musical styles of the songs to the left, with a more festive, reggae-ish beat, influenced by the strongly pro-Socialiste overseas departments and immigrant neighborhoods of France. 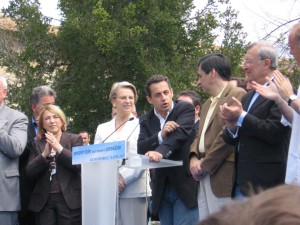 01:23-02:17 - “Sarko Oh-oh,” by Nicolas Luciani, the official theme song of the Sarkozy campaign. As an official song, the lyrics stay away from bold political claims, instead contenting itself with its hard-driving chorus and vague platitudes about Sarkozy promising a brighter future.

02:17-02:59 - “Jacques Chirac,” the official theme song of Jacques Chirac’s 1981 presidential campaign. This is by far my favorite song in the mix, a hilariously bad, hilariously 80’s historical relic from Jacques Chirac’s first run for the presidency. He came in third in the 1981 campaign, setting the stage for a decade and a half in political opposition before Chirac finally got the office he wanted in the 1995 presidential election. In the meantime, we’re left with the gift of Chirac’s theme song, which avows: “France has need of a man of courage and resolution. Vote Jacques Chirac!” I used some cheap GarageBand vinyl scratch effects to transition into this song, promoting the effect that while Sarkozy and Royal were battling back and forth, Chirac continued to cling to to the spotlight (despite the efforts of Sarkozy, running as the candidate of Chirac’s party, to push Chirac into the background and portray himself as a candidate of change).

03:20-03:50 - “Ségolène Royal Mix.” Royal refuses to be pushed aside, asserting her leftist alternative. 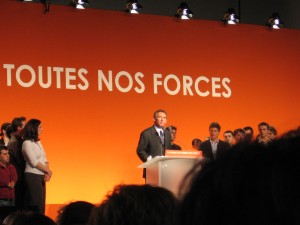 04:13-04:58 - “K-Bayrou,” by Antonin Prade. Suddenly the left-right back and forth is interrupted by this song in favor of François Bayrou of the “Union pour la Démocratie Française,” the “Union for French Democracy” or UDF. Bayrou cast himself as a centrist “third way” in between Ségolène and Sarkozy, and there was a moment toward the end of the campaign where Bayrou was surging amidst discontent with Royal’s campaign and it looked like the centrist Bayrou might come in second on election day and advance to a runoff against Sarkozy (which Bayrou would probably have won, being able to add the votes of the left to his centrist support, whereas Royal was much weaker amongst French moderates). But Bayrou faded in the end and came in third. This song is a parody of a Franglais pop song, “Femme Like You” by K-Maro. Really, a pretty terrible pop song; when I played this parody to my French host family they were disgusted with how bad it was (even my host father, who was a big Bayrou supporter). But it IS pretty catchy, and it’s easy to see why Prade picked it to parody. Prade’s lyrics promise “My vote: Bayrou. My voice: Bayrou … I want François Bayrou, who stands between two worlds.”

04:58-end - “Jacques Chirac.” Of course, the old man wouldn’t be sidelined so easily. My mix gives Chirac the last word, repeating until it fades out.