The conceit of the 1962 movie “The Man Who Shot Liberty Valance” is the collision between two very different people: a tough, gunslinging rancher and an urbane, peaceful lawyer, thrown together in a frontier town where both men’s talents will be needed to free the townsfolk of their oppressors.

Because those two protagonists are portrayed by John Wayne and Jimmy Stewart, in their first film appearance together, the movie – which I watched on a lark last night, in the mood for a Western – ends up being something more profound. These are two actors so confident, so recognizable – even for someone like me, who’s only seen a few of each of their films – that each one seems to stride around carrying their own movie with them.

I don’t say that in a bad way, the way one usually intends a statement about an actor looking like someone out of a different movie. Under the able direction of Western master John Ford, “Liberty Valance” is an excellent film despite being shot largely on studio sets dressed up to look like a dime-a-dozen Western Main Street. 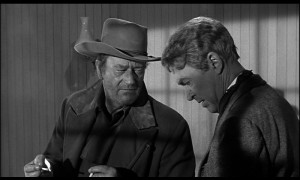 But for much of the movie, the style shifts dramatically depending on which of its co-stars is in the lead. When Stewart’s in the picture, it’s a civics drama, “Mr. Smith Goes To Washington” transplanted to the frontier, about a man facing down a corrupt political structure with little more than the self-evident power of his convictions. Stewart’s brilliantly named Ransom Stoddard is kind, modest and earnest, repaying the Scandinavian family who nursed him back to health by washing dishes and waiting tables, and then serving the whole town by teaching school and giving heartfelt orations about the importance of democracy and voting. His shield and sigil is a humble sign on which Stoddard paints, “Ransom Stoddard, Attorney at Law” – civilization, in other words, which Stewart conveys in every word and action.

But when Wayne takes the lead, “Liberty Valance” is a classic western involving violence, bravado, showdowns and a small town menaced by brutish, gun-toting bandits. As the toughest man in Shinbone, Wayne’s Tom Doniphon is good-hearted but standoffish, who lives by a western code. He’s the only man the titular desperado Liberty Valance fears, as the fastest shot south of the Picketwire. Doniphon stares down Valance and his gang, standing up for the meek Stoddard and the cowed townsfolk. He scorns Stoddard’s pacifism and tells him to learn how to shoot or get out of town. Doniphon’s shield is his six-shooter pistol, the symbol of the frontier and rule by strength and skill, a cool confidence that Wayne portrays in his sleep.

In one pivotal scene at the climax of the movie’s second act, the these two separate films collide into a synthesis, which Ford highlights by showing the scene from both Stoddard and Doniphon’s point of view. On that scene the whole movie pivots, with its events deciding who gets the girl, catapulting Stoddard on to fame and power and setting Doniphon into a downward spiral that ends with him (in the movie’s bookending scenes, set years after the main action) dead in a plain wooden coffin with nothing to his name but boots and his gun.

The other aspect of “Liberty Valance” worth mentioning is its meditation on truth, encapsulated by its most famous quote:

This is the West, sir. When the legend becomes fact, print the legend.

The two principal characters of the movie are a lawyer and a rancher, but reporter is the third-most important occupation in “Liberty Valance.” It’s the insistent questions of a journalist that leads Stoddard to tell the story of Liberty Valance in the beginning, kicking off the main story. Valance, rampaging through town, has two targets: the town’s lawyer, Stoddard, and its newspaperman, Dutton Peabody. It’s the law and the press that are the symbols of civilization, the lawyer and the newspaperman who end up as delegates to the territorial convention, the lawyer and the newspaperman who end up attacked by the lawless Liberty Valance in his final rampage. An edition of Peabody’s newspaper is used by Stoddard as part of his schoolhouse civics lesson, inspiring him to try to unite the townsfolk against the movie’s off-screen villains, the anti-homesteader ranchers.

But the reputation of Ransom Stoddard, the man years after the Liberty Valance affair is a powerful senator on the verge of becoming the vice presidential nominee, is built on a lie – a lie Stoddard has allowed to stand even though he found it too unbearable to accept himself. Stoddard, as fundamentally honest and decent as any good Jimmy Stewart character, reluctantly discloses the truth when pressed – but his interlocutors, good press-men who wheedled the story out of Stoddard by demanding to know the truth, ultimately decide that the truth isn’t worth printing. He rips up his notes (a step that I, as a reporter, winced at even if you accept that the story won’t be published) and declares that Stoddard’s legend is better than the truth.

Stoddard, though, in the movie’s final scenes, is unburdened by having punctured his own legend. Though the legend has allowed him to rise to the pinacle of power, it’s the truth that Stoddard craves. So he steps back, prepared to give up all his influence and return to the town where his legend was born – born over the ashes of a decent man, whose hopes and dreams were dashed in part by his own acceptance of the lie. The newspaper man embraces the legend, but from Stoddard’s point of view, “Liberty Valance” tells us that legends have costs.