It’s a funny thing about “X-Men: First Class,” the latest film based on the Marvel Comics team of superheroes – large chunks of it aren’t much better than the deservedly derided previous two films in the series, “X-Men 3: The Last Stand” and “X-Men Origins: Wolverine.” And yet the overall movie is a far superior work than those two critical duds.

There’s two things, I think, that elevate “First Class” into the realm (though not quite to the level) of “X2,” one of the best superhero movies made. 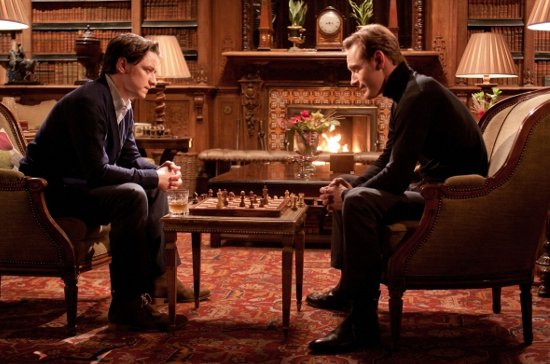 One is the excellent pair of lead performances from James McAvoy (Charles Xavier/Professor X) and Michael Fassbender (Erik Lehnsherr/Magneto). Much how the fantastic performances from Patrick Stewart and Ian McKellen as the same two characters elevated every scene they were in in the original X-Men trilogy, McAvoy and Fassbender nail the central conflict in the X-Men mythos: for a marginalized group, is it better to pursue peaceful coexistence or violent separation? More specifically (given the origins of the X-Men comics in the Civil Rights era as a metaphor for race), it’s the battle between Martin Luther King and Malcolm X – with more explosions and spandex. McAvoy as the idealistic, slightly naive young Charles is the perfect foil for the movie’s engine, Fassbender’s cynical, revenge-obsessed Erik.

The second factor making “First Class” into a better movie than it could have been is the capable direction by Matthew Vaughn (“Layer Cake,” “Kick-Ass”). Vaughn approaches the often ludicrous elements of his plot with an artist’s flair, turning what could have been a fatal flaw (the underdeveloped characters of almost everyone but Charles and Erik) into a boon. Only four characters in the movie receive any serious focus: Erik, Charles, Raven/Mystique, and Kevin Bacon’s villain Sebastian Shaw. But by building the film around conflicts among those characters and using the rest of the cast effectively as objects for the four main characters to fight or persuade, Vaughn combats character sprawl (a common risk in a team superhero movie like X-Men) and focuses on his leads.

Essentially, “First Class” uses the same template as “X2” – two people with sharp disagreements have to work together against a greater evil. By the end of the movie’s first act, Charles and Erik have come together as friends and allies – a pampered, Oxford-educated scion of wealth and a bitter survivor of dark experiments in a Nazi concentration camp. The catalyst for their unlikely friendship is Shaw, who experimented on Erik in the camp to try to bring out his superpower (control of magnetism), and whose designs to destroy non-mutated humanity draw the opposition of Charles and his CIA handler Moira MacTaggert.

Even though “First Class” gives the supporting cast only minimal amount of character development (or none, in the case of a few of Shaw’s henchmen), what moments they do get generally work well. I was a little disappointed in Hank McCoy/Beast, who wasn’t a bad character as portrayed by Nicholas Hoult, but who wasn’t the suave, sophisticated man of letters whose grace and intelligence is belied by his bestial appearance of the later comics (and “X3,” as voiced by Kelsey Grammer, in one of the highlights of that very uneven movie). McCoy is merely an awkward nerd, ashamed of his mutation (prehensile feet). His character arc is interesting – as interesting as anyone outside of Erik and Charles – but he just isn’t far along enough to the point I want to see him at.

Fortunately, the movie’s ending sets up a sequel perfectly. With all the terrible movies getting sequels out there, this assured, confident superhero flick deserves a follow-up.