The new movie “Cowboys & Aliens” makes a great show of playing with film conventions, but the film’s most striking departure from convention involved neither six-shooters nor space ships. Instead, it was this: Jon Favreau’s camera spends more time lingering on star Daniel Craig’s chest than it does on co-star Olivia Wilde’s. 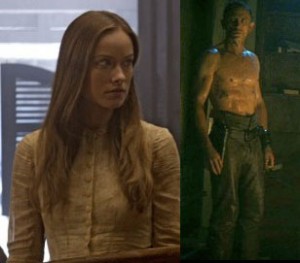 The male star regularly finds himself bereft, in whole or in part, of his shirt, giving audiences plenty of time to gawk at James Bond’s chiseled pecs. Wilde, in contrast, usually wears a chaste 19th Century dress (though her split-leg riding style might have been plenty scandalous in the time period), and even when the plot contrives to leave Wilde naked we only see her from behind or from the neck up.

Given Hollywood’s decades of experience objectifying female bodies, this turnabout is all the more startling given that it takes place in what is little more than splashy popcorn flick with a few pretensions.

Above: Olivia Wilde (left) and Daniel Craig in “Cowboys & Aliens”

I liked “Cowboys and Aliens.” I didn’t love it, and I’m tempted to downgrade it because it failed to rise up into the more rarified space I had prepared for it. But what’s the point of doing that for a summer action movie?

An example of “genre mashup” in which two ordinarily distinct genres of fiction are mashed together into a single work — along the lines of “Pride & Prejudice & Zombies” — the plot involves a frontier town of cowboys, bandits, saloons, gold miners, and Native American tribes suddenly menaced by a group of murderous, high tech alien prospectors.

This genre mashup is clearly the whole point of the movie, as evidenced by its title, and yet I didn’t find it quite as novel as others. Perhaps this is because I’m a fan of “Doctor Who,” which about every other week involves aliens of one form or another wreaking havoc in a different historical setting. Maybe it’s the logical side of my brain, which insists there’s no particular reason why alien invaders would arrive on Earth in the late 20th Century America and not any other random time and place in history.

In either case, I took the movie’s concept for what it was: a nice treat for those who, like me, enjoy both westerns and science fiction.

“Cowboys & Aliens” was much more of the former, not bringing aliens in for a good half hour. Instead, we’re introduced to Craig’s Jake Lonergan, an amnesiac with a strange metal bracelet around his wrist. Lonergan may have forgotten his name, his past, how he got his bracelet and how he ended up lying in the wilderness with a cauterized gut wound, but he hasn’t forgotten how to kick ass — Jason Bourne in Dodge City.

All of these mysteries are delivered piecemeal to viewers over the course of the movie, as Lonergan teams up with Harrison Ford’s surly cattle baron Woodrow Dolarhyde and Wilde’s mysterious gun-toting Ella in a posse aimed at bringing some frontier justice to the titular aliens.

Other than the concept, the movie doesn’t really make any difficult decisions. The aliens are kept simple, barely explained villains. All the subplots get wrapped up neatly as everyone lives happily ever after. There are no grand metaphysical questions at stake, just a simple story of bad guys kidnapping the townsfolk in which the bad guys happen to be giant clawed lizardpeople with spaceships and ray guns. The treatment of the native tribe is more than a little objectionable — the Indians aren’t demonized, just sanitized and simplified.

But while “Cowboys & Aliens” could have been a thought-provoking, convention-defying innovative movie à la “District 9,” it went the route of the Hollywood blockbuster that simply sought to entertain, not to challenge, its audience. And there’s nothing wrong with that. I enjoyed the movie, which was well-made and well-cast and filled with characters who took themselves and their setting seriously. I also would have liked that alternate movie that Favreau didn’t make, but I’ll settle for the fun but empty one he gave us. 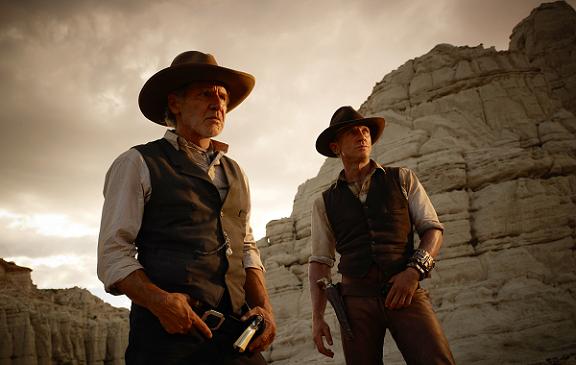