Baseball at its best

The best baseball games are masterpieces, with moments of individual brilliance and failure (frequently on two sides of the same play) interwoven in to an emotional sea of rallies and collapses, all marked by baseball’s true defining characteristic: timelessness. There is no clock in baseball, no inevitability, no moment at which victory becomes impossible until the moment it is achieved. As long as you’ve got an out left, your chances of winning remain alive.

But while the best baseball games are remembered forever, Wednesday night brought something even better: three agonizing, nail-biting baseball games with everything on the line — and everything coming to a head within minutes of each other.

The setup: at the start of the day on Wednesday, four baseball teams were tied for the last two spots in the playoffs on the last day of the season. Failure brings an early winter. Success and the road to winning the World Series remains open.

In the American League, the Boston Red Sox and Tampa Bay Rays each had 90 wins and 71 losses. A month ago, Boston had a 9-game lead on Tampa and by anyone’s estimation had a playoff berth locked up. Weeks of terrible play by the Red Sox and good (but not great) play by the Rays had left the two teams tied. If they both won or both lost, they would play a one-game play-in on Thursday to determine the winner of the AL Wild Card. If one team won and the other lost, the winner was in.

The situation was eerily parallel in the National League, where the Atlanta Braves and the St. Louis Cardinals each had 89 wins and 72 losses. A month prior Atlanta had led the Wild Card race by 8 and a half games; their own collapse and the Cards’ strong play left the two teams in the same situation as the American Leaguers.

At 7:10 ET, two of the games kick off. Atlanta is playing the Philadelphia Phillies in Atlanta, their rivals and the best team in the National League. But Philly is starting a procession of lesser pitchers rather than one of its domineering aces.

At the same time in Baltimore, the Red Sox take the field against the Orioles, 68-93 and a perennial doormat for the past decade. With no playoff game to prepare for, Orioles manager Buck Showalter doesn’t hold back any stars from the game.

The same can’t be said for the New York Yankees, who one minute later start playing in St. Petersburg against the Rays. The Yankees are the class of the American League but, like the Phillies, empty out their bullpen while saving their two good pitchers for the postseason. Unlike the Phillies, Yankees manager Joe Girardi gives most of his stars just an at-bat or two before pulling them from the game in favor of the Yankees’ backups.

Finally, at 8:06 p.m. ET, the Cardinals kick off their match against the Houston Astros, a team so pathetic this year they make the Orioles look like champions. Houston starts the game with 56 wins and 105 losses, having traded away their few remaining decent players during the season for prospects.

Despite starting last, it’s the Cardinals game that wraps up first. By 8:24 p.m., the Cardinals lead 5-0 and behind the dominant complete-game pitching of Chris Carpenter roll right over the Astros on their way to an 8-0 victory.

It quickly looks like the Rays game is heading the same way. Mark Teixeira hits two home runs, one a grand slam, and by 8:52 New York leads 7-0. One can almost forgive Girardi for pulling his starters out.

Meanwhile, Boston settles in to a 3-2 lead over the Orioles. It’s tense and both teams threaten to score but things stay the same until 9:34, when the Baltimore skies open up, the tarps come out over the infield and a rain delay begins.

As it rains in Baltimore, Atlanta’s rookie sensation closer Craig Kimbrel enters the game in the 9th with a 3-2 lead. Get three outs and Atlanta advances to a Game 163 play-in against St. Louis, who are minutes away from finishing up their 8-0 win. Kimbrel can’t do it, giving up a single and walking two batters before Chase Utley of the Phillies (one of their stars, still in the game in the bottom of the 9th) hits a sacrifice fly to tie the score. Atlanta finishes off the frame without falling behind and play moves into extra innings — “free baseball” as true fans, or those without pressing demands on their time, call it.

I switch over to the game in time to see Sam Fuld draw a bases-loaded walk, forcing in the Rays’ first run. It’s 7-1 Yankees, still a safe lead, but the bases are loaded and there’s no one out. With no clock in baseball, this is a dangerous situation.

The Rays’ Sean Rodriguez then gets hit by a pitch, forcing in a second run. I send an instant message to a friend who’s also following the action:

We’re both rooting for the Rays here. They’re an underdog team with a small payroll, facing the Evil Empire of the New York Yankees and in a race with the Red Sox, whose vestiges of eight decades of sad-sack futility have been largely erased by two World Series championships in a three-year span and the second-highest payroll in baseball.

Yankees pitcher Luis Ayala, a once-good reliever past his prime, recovers from this bad situation to strike out Desmond Jennings and then gets B.J. Upton to hit a fly ball. The sacrifice fly drives in a run, and with a 7-3 lead the Yankees will take it — the second out in the inning matters far more to them than the third run.

That’s what everyone thinks, at least, until the Rays’ young slugger Evan Longoria steps up to the plate.

It’s a three-run home run and Tampa Bay now trails only 7-6. Boston’s players are in the visiting clubhouse at Camden Yards watching the Rays come back.

But Johnny Damon pops out, sending the Yankees out of the inning with a one-run lead.

That’s where it stands in the bottom of the 9th. Girardi, thinking of the playoffs, doesn’t use his future Hall of Fame closer Mariano Rivera to finish the game, instead turning to rookie Cory Wade. It looks like it’s going to pay off as Wade puts down the first two Rays. Pinch hitter Dan Johnson comes to the plate to bat for Fuld, in what seems like the final chance for Tampa Bay’s season. Boston is leading against the lowly Orioles, and the Rays hopes are in the hands of Johnson: by some measures the very worst-hitting position player in baseball in 2011, worse than even every National League pitcher but one.

So, of course, Johnson, down to his last strike, hits a line drive off the foul pole for a game-tying home run.

Unlike a normal day of baseball, where you concentrate on a single team’s game and fill in how your team’s rivals did later, this day of baseball is unfolding simultaneously. Clearly, special measures are called for to take in the drama, and MLB.TV comes to the rescue: 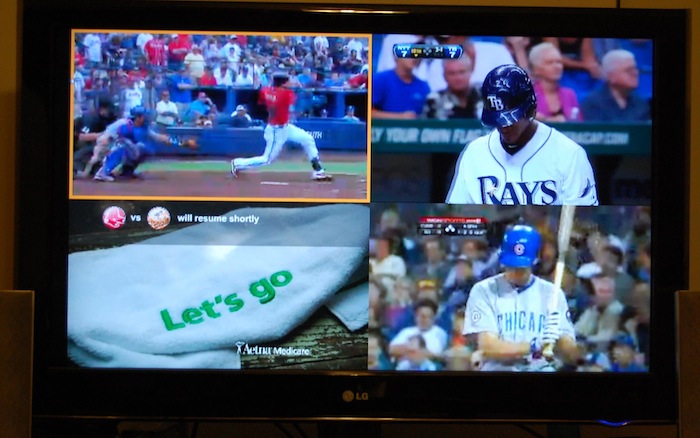 Using MLB.TV’s “Mosaic” feature, I watch four games at once, picking and choosing with a click which audio feed I listen to. Clockwise from upper left, the Red Sox-Orioles game, the Yankees-Rays game, the Phillies-Braves game, and my dear, pathetic Cubbies’ final game of the season (thrown in mostly to fill the fourth square with something).

The Red Sox players watch from their clubhouse, still under a rain delay, as the Rays storm back. Nine minutes later, the rain in Baltimore ceases and play resumes.

Atlanta and Philadelphia play on, tied at three-all, through four extra innings until ex-Astro Hunter Pence gives the Phillies a 4-3 lead with a bloop hit. Atlanta is unable to rally in their half of the 13th and at 11:40 ET the Phillies eliminate the Braves. St. Louis has won the National League Wild Card.

But there’s still baseball going on in the American League, where Boston preserves its 3-2 lead into the 9th and Tampa Bay holds onto a 7-7 tie.

Into the 9th inning comes Boston’s closer Jonathan Papelbon. Stat-trackers point out that Boston this year, even with its epic September collapse, had been 77-0 and when leading after eight innings. Papelbon gets two dangerous Orioles, Adam Jones and Mark Reynolds, on swinging strikeouts. The average team with a one-run lead and two outs in the 9th inning wins 95 percent of the time. Papelbon goes ahead of Chris Davis, no great hitter, and needs only one more strike to assure the Red Sox of at least one more day of baseball.

Instead, Davis doubles to center. Almost simultaneously, the Yankees’ Jorge Posada hits a ground ball to Longoria. Greg Golson, the Yankees runner at third, breaks the wrong way and gets tagged out by Longoria.

Then the crazy happens, turning a fantastic night of baseball into one of the most memorable ever.

At 11:59 ET, Nolan Reimold of the Orioles follows up Davis’s double with one of his own. Papelbon has blown the save. And he’s still in trouble, with Robert Andino batting and a runner on second. Andino had, just two days earlier, destroyed the Red Sox’s one-game lead in the Wild Card with an 8th-inning inside-the-park home run. At two minutes past midnight, he makes them pay again, looping a fading line drive to left that Red Sox outfielder Carl Crawford JUST can’t quite catch. As Reimold rounds third, Crawford — a first-year Red Sox who had previously played his entire career for Tampa Bay — comes up with a desperation throw towards home plate.

It’s not enough. Reimold scores the winning run and the game ends.

As Orioles pour out of the dugout in celebration, Red Sox players look on in disbelief. But their season’s not done yet — if the Yankees, the hated enemies of the Red Sox, can just pull out a win over the Rays.

At 12:05 a.m. ET, he ropes a pitch from the Yankees’ Scott Proctor just fair down the left field line, over the fence for a game-winning home run.

In ten minutes, the Red Sox have gone from one strike away from victory to elimination, completing perhaps the most epic collapse of any baseball team, ever. (Even more than my own star-crossed Cubbies in 1969.) Moreover, it was the second time they had been a strike from salvation, after the Yankees went to two strikes on Dan Johnson in the bottom of the 9th in Tampa.

Four baseball games. Everything on the line. Great plays, clutch hitting, key strikeouts, ferocious rallies and agonizing failure. All unfolding at the same time on a single screen in front of me. While I was hoping the Cardinals, my Cubs’ longtime rivals, wouldn’t make the playoffs (and so by default cheering for the Braves), I was also cheering for the Rays. So this whole smorgasbord of baseball was not only exciting but had a happy ending.

This game I love doesn’t get any better than that.