What's in a league?

Major League Baseball is currently discussing the contentious issue of “realignment” — whether to change the current alignment of teams into two leagues with three divisions each. It’s a debate with significant implications. In addition to the American League having the Designated Hitter while the National League makes pitchers bat, teams play their divisional cohorts more frequently. This means that a team in a tough division, like the AL East, might have a tougher time making the playoffs than a team in a weaker division, which in recent years has usually been one of the Central or West divisions.

The current thinking appears to be to move the Houston Astros from the NL Central to the AL West, giving 15 teams in each league and balancing out the current alignments where the NL Central has six teams and the AL West four, with every other division having five teams. Under this schema, there would essentially be interleague play every day, rather than it being a feature of a few summer weeks like it is now.

I’m here to say, half-seriously, that MLB should think bolder: Throw out the baby with the bathwater, recognize that some of the game’s historical relics like leagues have no functional purpose, and take advantage of the clean slate to come up with a more coherent system than the one that has a team in Dallas playing an eighth of its games against a team in Seattle, 1,670 miles away.

(When I say half-seriously, I mean it. Part of me really appreciates all of baseball’s traditions. Part of me doesn’t care. All of me enjoys throwing hypotheticals out there.)

For reference, here’s the current layout of MLB teams and their divisions. 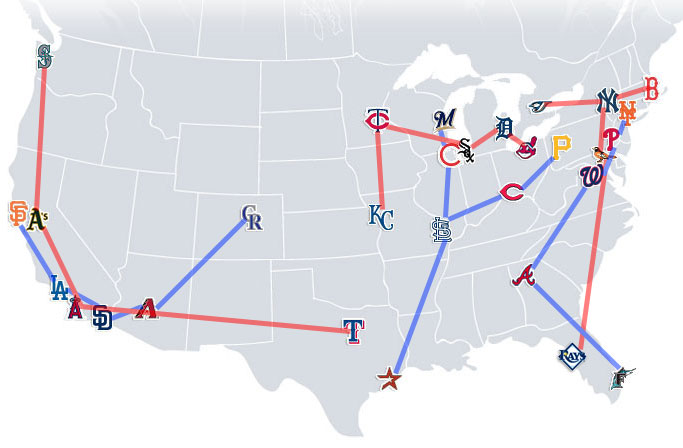 As you can see, this makes a rough sort of sense. Certainly more than the old, pre-1994 divisions, whereby the Atlanta Braves were in the West division. If you started with a given that each team was in their current league, this is probably how you would draw East, Central and West divisions.

But this layout includes some long hauls inside divisions, like Texas to Seattle, Houston to Milwaukee, Miami to New York and St. Petersburg to Boston. If the rumored wishes of MLB Commissioner Bud Selig come true and Houston joins the AL West, baseball’s longest divisional haul becomes even longer (1,891 miles), although NL Central teams suddenly have to go no further south than St. Louis for their division games.

So my thinking: why not see if throwing out the league concept lets one make a better divisional map? True, radical realignment, where teams are together with their closest, most natural rivals.

I’ll get into my justifications for this a little later and first talk about method.

The big sticking point in this ends up being the West Coast. There are five teams in California, plus Seattle 678 miles up the coastline, not to mention Arizona just 300 miles from San Diego. If you want to divide baseball into six divisions of five teams each, that’s a problem. You’ve either got to bump one of the teams into a division with teams it’s not close to, or relocate one of the teams.

It’s relocation that Deadspin picked when they did a very similar exercise earlier this summer, moving the Seattle Mariners to Oklahoma City. That’s partly tongue-in-cheek — the Seattle Supersonics NBA team moved to Oklahoma City and became the Thunder in 2008. There are some appeals to dumping on Seattle, since it’s the most remote MLB team by far. But Seattle as already lost one sports team recently, the Mariners are supported by a pretty passionate fanbase, and its remoteness is a plus, too: there’s no one near by to horn in on the Mariners’ market. Moving the Mariners probably makes a whole corner of the country tune out of baseball.

Besides, there’s a simpler solution: the Oakland Athletics. Unlike the Mariners, with their devoted fans, the A’s average only around 17,000 fans per game. The team is desperate to move already, if only around San Francisco Bay, hating their stadium and their locale. So my solution is to just move them a wee bit farther: across the country, to Charlotte, N.C.

Charlotte is one of the largest markets in the country without a major league baseball team, with 2.5 million people in its region. It’s a major financial center, with a young, affluent population, and has already proven it can support sports teams with NFL and NBA franchises. While this would hone in on the Atlanta Braves’ television market, the Braves have had an entire region to themselves for too long and need to learn to share:

More to the point, moving a team from Oakland to Charlotte makes my new divisional map a lot easier. Without further ado: 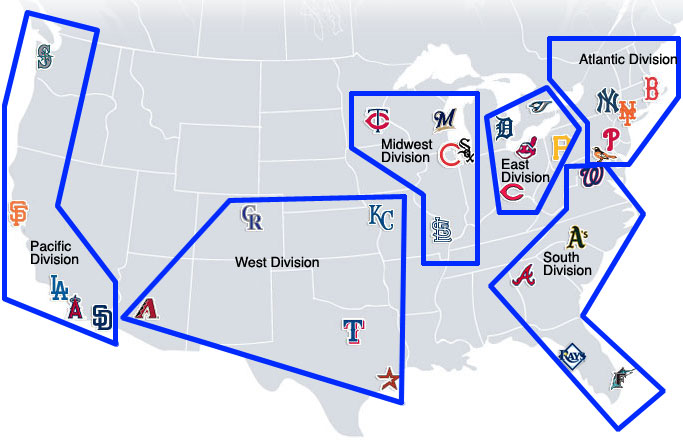 My revised divisional alignment would be:

The main virtues to this system, in my mind, would be geographical conciseness — already explained — and rivalries. Teams that are currently near each other but in separate leagues rarely play each other, and this would largely correct that. Cities with two MLB teams (Los Angeles, Chicago, and New York) would be in the same division, playing each other a half a dozen series per year instead of just two interleague match-ups. The idea of my Cubs being in the same division as the  Twins and White Sox appeals to me — those would be some great regional rivalries.

Unfortunately, a few rivalries got split here. The Nationals and Orioles, who’d be nice head-to-head, end up in different divisions. So do the Cardinals and Royals, a natural interstate rivalry. But you can’t make it perfect.

How would playoffs work if you got rid of the leagues? Currently, each league’s best teams play each other, with the league winner going on to the World Series. Under this model, you could keep the league idea, maybe putting the Pacific, West and Midwest in a league and the East, South and Atlantic in another. But a better model might be to just go with one league and do a playoff bracket. Each divisional winner, plus two or four Wild Cards (a question for another day) get sorted into brackets based on their regular season records and then play until there’s a champion.

As for scheduling, I’d keep the unbalanced schedule whereby teams play their own division more often. The rest of the schedule would be tricky — there’s simply too many teams to play a home and away series every year against the other 25 teams not in your division. Just playing three games each against those 25 teams would occupy almost half the 162-game season. That could be a good way to break it down: half your games in the division, half with one series each against the rest of the league. Teams could alternate years over who hosted the season series.

Alternately teams could only play half the divisions each year, while playing twice the number of games against non-divisional foes.

All of those questions seem fairly surmountable. In fact, the biggest obstacle in my mind isn’t throwing out more than a century of tradition in discarding the National and American Leagues.

It’s what to do about the Designated Hitter.

This rule, for the uninitiated, is a travesty that upsets the beautiful simplicity of the game. There are nine players. Everyone plays defense and offense. Some players are bad at one and make up for it by being good at the other.

If you add an extra player and say that pitchers don’t have to hit simply because they’re usually terrible at it, you’ve got one player who only plays defense and one player who only plays offense. It’s just not right. Sure, use it as a rule in exhibition games like the All-Star Game, and perhaps in minor leagues for players on rehab assignments. But not in the bigs.

Unfortunately, it has its supporters. It leads to more offense by replacing weak-hitting pitchers with someone who is specialized in hitting. It gives teams more flexibility to deal with aging, injured or defensively challenged players by swapping them in and out of the DH spot. It can prolong players’ careers by letting them keep hitting without the rigors of playing the field. It seems more “modern” and specialized rather than the hidebound “because we always have” traditionalism of pitchers batting. The player’s union, among others, would probably never countenance abolishing it without significant compensation, and the owners aren’t about to pay out more money just in the name of eliminating a position that doesn’t cost them much to fill.

Even if I were wholly committed to this realignment proposal (which I’m not) I might back away if abolishing the leagues meant the MLB-wide adoption of the designated hitter.

The compromise I would suggest is do away with the DH but expand the active roster limit from 25 players to 26. The extra player will give teams more flexibility to carry a defensive liability who swings a hot bat, or a player whose injuries limit him to pinch-hitting, and will appease the player’s union by keeping more players in the game.

But if baseball could seriously contemplate something like this, I’d be incredibly excited if the Designated Hitter was the only roadblock. Big change is exciting, and I think a realignment plan like this one would be ages better than tinkering with moving the Astros to the AL.

Do I really want to eliminate the American League and National League? I’m conflicted. The leagues have real historical significance, dating back to their origins as independent leagues. The first connection was simply an agreement that each league’s champion would play each other in a World Series at the end of the season. Over the years the differences between the leagues have faded away. They now share an umpire pool, and play each other in the regular season, and have identical rules except for the Designated Hitter. So other than that DH sticking point, there’s no real substantive importance remaining to the leagues.

But make no mistake about it, this would be a major revamp of baseball’s organization. No longer would someone be able to say they were the “National League record-holder” in one feat or another. 2013 would be a bright dividing line, before which point there were league pennant-winners and after which there were not. It’s this appeal to tradition, and history, and statistics that gives me more pause than the practical implications of abolishing the leagues, which would be mostly limited to the DH question. As I said above, I’m half-serious about this. Half of me doesn’t care if the leagues go away, the other half does and is throwing this idea out here only to stir speculation.

Hopefully, I’ll accomplish at least that much.