What if a single state actually did secede?

Back when secession petitions were dominating the public eye after the 2012 election, I moved past the Civil War references and political disputes to take a look at what to me was a much more interesting question: if a U.S. state did legally secede from the Union, what would be the impact? My analysis looked at currency, trade, immigration, budgets, taxes and Internet domain names.

Ever since some people decided that asking Barack Obama to let states secede would be a good idea, reactions have been varied. Some seem to take it quite seriously. Others view it as a “frustration release.” Some find the whole talk appalling, while others see it as a glorified joke.

Me? I find the whole thing endlessly fascinating.

What would happen if South Dakota actually seceded?

But let’s say South Dakota voted to secede, and the United States said “good riddance” and approved it. Mutual consent from the seceding section and the rump state seems to be the only way such a thing legally happens. (This mutual consent does not necessarily have to be uncoerced, but never mind that for now.)

What does the new Republic of South Dakota (RSD) look like?

Well, in this scenario in which none of South Dakota’s neighbors secedes, the RSD would become an enclave inside the remaining United States of America.

This means RSD’s legal independence is not going to be pure. We would be dependent on our former countrymen not just to not invade us, but also for our economic wellbeing and comfort.

So let’s assume we’ve got a negotiated, amicable divorce here. Treaties are signed between the USA and the RSD. South Dakota enters into a military alliance with the United States. It forms, at least for the short term, a currency union. (The secessionist government might prefer to eventually print or mint its own currency, but let’s say they push that off into the future to minimize the considerable economic disruptions.)

More important than currency, at least in the short run, is the question of a customs union. Does South Dakota enter into one with the United States, allowing friction-free travel over South Dakota’s extensive land borders — good for residents, good for tourism, but weakening the new nation’s sovereignty and forfeiting potential revenue from tariffs and customs duties.

Let’s say the RSD Congress decides the economic benefits of free trade with the USA outweighs the other advantages, and enters into a customs union. Practically, then, some of the big day-to-day aspects of life are the same for the citizens of the world’s newest republic. They still shop with dollars and travel unimpeded over the border, they order packages from Amazon without having to pay customs. They can ship their agricultural produce over the border without having to pay tariffs.

In others words, the new RSD looks something like the member states of the current European Union.

I suspect that at least in the short term, the new South Dakota government will adopt a liberal attitude towards RSD citizenship, with a very low standard for acquiring it. Born here? Citizen. Living here? Citizen. Move to the new republican immediately after its founding? Citizen.

That’s because South Dakota, not very densely populated to begin with, is going to face an immediate emigration problem as people not high on the whole secession project flee. The new RSD government is going to want to A) put as few barriers as possible for people who want to stay, and B) probably encourage non-residents to move here, to counteract any population exodus with new taxpayers.

After the heady first years of Free South Dakota, citizenship may become more difficult to acquire, requiring a period of residency and other prerequisites instead of being handed out like candy. (The United States may insist on this if it faces a rush of Americans acquiring South Dakota citizenship for legal and tax reasons.) The question of dual citizenship with South Dakota and the USA would probably be negotiated by treaty as part of the secession.

South Dakota, unlike many states in the USA, has large subsets of its land and population with different legal status — Native Americans. More than other subsets of the state, South Dakota’s reservations might decide they want no part with the new country, either remaining the USA or independently seceding. Either way, the new South Dakota might look less like a rectangle with a tail and more like this curious creature: 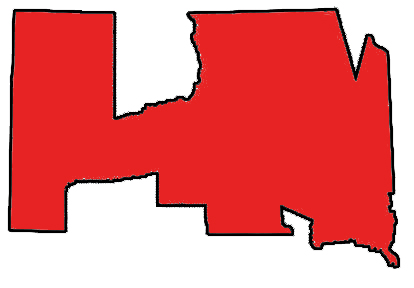 A map of South Dakota, with most of its reservations removed. Two interior reservations, Crow Creek and Lower Brule, were not excised.

That’s ignoring the question of the Lower Brule and Crow Creek, the two reservations squarely in the center of the state, and Flandreau, which to the best of my knowledge is very near to but not touching the Minnesota border.

The elephant in the room is the question of government spending and taxes, issues most discussion of the practicalities of secession seems to focus on.

South Dakota is a net recipient of federal funds, receiving more federal spending than residents pay in local taxes. So seceding would be a bad fiscal move for South Dakota — but maybe not by as much as you’d think.

If South Dakota secedes, its residents are immediately free from the burden of federal taxes. Hooray! But those residents also lose many benefits residents consider essential, which the new country would have to make up with new tax revenue.

Just looking at the basics, South Dakota’s most recent state budget included $1.2 billion in general fund revenue (from sources such as South Dakota’s sales tax) and $1.7 billion in federal funds, propping up programs such as K-12 education ($180 million — or another 1 percent added to the sales tax), higher education ($223 million), highways and transportation ($378 million) and taking care of people in need (around $750 million between the departments of Social Services and Human Services).

Just to replace those funds is going to require a 150 percent increase in South Dakota’s revenues.

If South Dakota is determined to remain an income-tax free land as an independent country, it could achieve this through consumption taxes. The sales tax would have to go from 4 percent to about 14 percent to accomplish this, or the RSD Congress could pass a more efficient Value Added Tax. But given that a huge percentage of South Dakota’s population lives within an hour or two of the state’s borders, high consumption taxes would encourage people to do their shopping just over the border. This is a smaller problem if you have customs posts on the border, but if you went for friction-free travel (as I supposed) you’re going to see a huge transfer of economic activity out of the new country and much less bang for the buck from the higher taxes — and thus a need for even more taxes.

So secession probably wouldn’t, in the end, spare South Dakotans the indignity of an income tax, though the RSD Congress could structure it how they wanted, perhaps going with a flat tax. A mixture of higher consumption taxes and a new income tax might meet these immediate revenue needs. There’s plenty of other sources — just to name one, the RSD could put up tolls on its highway system.

South Dakota gets more from the federal government than just the transfer payments reflected in its budget, however. Let’s look at a few big ones:

So even just taking Medicare and farm subsidies, you’ve got another $1.75 billion on top of $1.7 billion in state-budget federal spending to make up. Now we’re talking a 380 percent increase in South Dakota’s state tax burden, an extra $3.4 billion for a total of $4.6 billion from a state that used to just pay out just $1.2 billion from its own taxes. (Remember, however, as stated above, these new RSD taxes would replacing old US taxes.)

An important consideration: 1 percent of the U.S. military budget is about $6.8 billion. Escaping South Dakota’s share of paying for the world’s biggest military is HUGE. (Our revenue, by comparison, is about 0.1 percent, or one one-thousandth, of the U.S. government revenue.)

The budget situation for an independent South Dakota would be daunting, but it wouldn’t necessarily be disastrous. Independence from the United States would bring plenty of new spending burdens, but it would also free South Dakotans from many of the obligations they are currently helping to support as a part of the US.

A few other final considerations. An independent South Dakota, surrounded by the United States, would be in a unique position to be a predatory country. The state of South Dakota liberalized its usury laws to attract credit card companies and banks from others states; the Republic of South Dakota could go full Switzerland and set itself up as an independent banking haven. Casinos situated on the country’s new border with the U.S. could attract considerable tourism.

Not losing South Dakota’s existing tourism would be a big concern. The new government would want to do its best to make the RSD an easy place for families to visit, while also adding new incentives for people to visit, as listed above.

The biggest risk for a seceded South Dakota, in my mind, is one I mentioned above — emigration, along with the related issue of capital flight. The new state would have to persuade citizens the new political venture was not a risk, that it was a safe place to live and work and keep their money — or attract new residents to replace those who left.

It would also be an opportunity for South Dakotans to remake their laws in a manner reflective of their desires, rather than reflecting compromises with other, culturally and socioeconomically different parts of the country. Citizens of a free South Dakota might be more willing to pay taxes if they felt more of a connection to where the money was being spent. History is full of countries willing to tax themselves far more than they were willing to let a foreigner tax them, and while the full United States isn’t (despite some ill-considered feelings on the part of some) a “foreign” country to South Dakota, taxing and spending WOULD be more local in a free South Dakota, and that means something.

All this, of course, presumes a best-case scenario, of a United States government that not only allowed South Dakota to secede but worked with it to create a treaty regime allowing for a relatively smooth transition, as well as presuming an enlightened RSD government making optimal decisions for the state. None of that would be givens in this already basically impossible scenario. This thought experiment developed the idea that secession wouldn’t necessarily be disastrous for South Dakota, but it very easily — maybe very probably — could be.

Please point out any math mistakes, erroneous assumptions and overlooked variables in the comments. I know I have plenty of all of them.