My research on Egypt

I’ve been watching the political tumult in the Middle East with interest since before the “Arab Spring” first broke out in late 2010. After writing a research paper on the political economy of the United Arab Emirates for one college class, I decided to keep my research focused in the Arab world for my next class, on the “Diffusion of Democracy,” in the spring of 2008. I wrote a case study of three different Arab countries in different situations — oil-rich monarchy Kuwait, impoverished monarchy Jordan, and massive then-dictatorship Egypt.

While Jordan and Kuwait have had little political change since then, Egypt has been in near-continuous uproar. And I’m still proud that much of my analysis proved prescient. The full essay is here or embedded below, but here’s some choice excerpts.

By way of quick background, I analyzed the countries from two perspectives: structural and process. Structural analysis looks at what socioeconomic characteristics correlate with democracy, and sees how the undemocratic countries compare to try to predict which are likely to become democratic. I used two primary datasets. One was assembled by Ronald Inglehart and Christian Welzel, who took the massive World Values Survey and assigned every country a value based on its citizens’ responses on two axes — one between “traditional” and “secular/rational” values associated with industrialization, and one between “survival” and “self-expression” associated with the rise of the consumer-based economy. Inglehart finds that the self-expression values correlate well with support for democracy. Here’s a fascinating map showing how various countries fall; you can see right away it is not optimistic about the Muslim world: 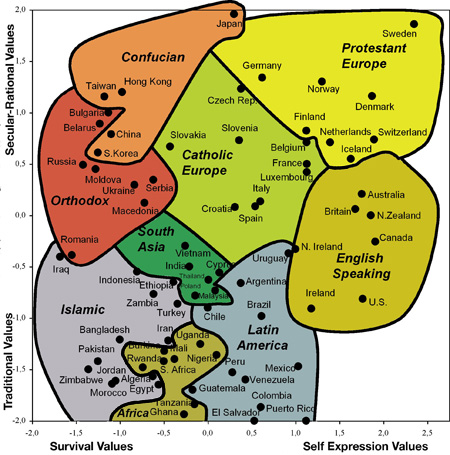 Secondly, the Egyptian political scientist Moataz Fattah conducted a survey of literate Arabs throughout the Muslim world to try to gauge support for democracy. (The literate-only dataset is a significant limitation that probably serves to overestimate democratic values.) Fattah divided the Islamic population into four general camps — “traditionalist Islamists” who reject democracy as contrary to Islam, “modernist Islamists” who want a democracy compatible with Islam, “autocratic statists” who are secular supporters of dictatorship, and “liberal pluralists,” secular supporters of democracy. In general, where the modernists and the pluralists outnumber the traditionalists and the statists, support for democracy is strong.

But while structural analysis has a pretty good track record of predicting democratization in the long run, they don’t very much to say when those transitions are likely to occur. That’s the emphasis of a process-oriented approach, which takes a qualitative look at the structure of a regime and how it is likely to bend or break to popular democratic pressure. This approach also looks at what groups there are in society who might be able to exert effective pressure to demand democratic reforms.

In Inglehart’s model, Egypt scored a -1.57 on the traditional-rational axis and a -0.4 on the survival-expression axis. That’s not good — only a handful of countries that far to the left on the survival-expression axis are democratic, and none are paragons. Still, Inglehart did find a substantial constituency for democracy in the Egyptian survey — 30 percent of respondents had self-expression values, comparable to Venezuela, Peru, South Korea and Portugal. Egypt’s Freedom House scores (under the Mubarak regime) were actually less free than Inglehart’s model would predict. My conclusions from this model:

This suggests that Egypt is due for at least some formal democratization over the long term because its government is out of tune with the beliefs of its people. It would not take very much expansion of self-expression values to lead to a major change in this modernization model: “any society in which more than half the population emphasizes self-expression values scores at least 90 percent of the maximum score on liberal democracy.” On Inglehart and Welzel’s measure of “effective” democracy (this is to say, elite corruption), Egypt is a poor performer, ranking among the most corrupt countries in the world. Even if Egypt were to acquire formal democratic institutions, Inglehart and Welzel do not predict any rapid improvements in effective democracy. (Emphasis added)

In light of what happened three years after this paper, I think this paragraph holds up very well.

Fattah’s model suggested “Egyptians have among the strongest preferences for democratic institutions in the Muslim world (higher even than Muslims living in the United States) and also show high support for ‘democratic values.’” Only three percent of literate Egyptians were “traditionalist” (undoubtedly the actual figure is higher) and seven percent statist, compared to a huge 63 percent of modernist Islamists and 27 percent secular pluralists. In contrast, the rates of traditionalists in other Arab countries were 26 percent in Syria, 25 percent in Algeria and 46 percent in Saudi Arabia. But the dominance of modernist Islamists over secular pluralists in the Egyptian literate population — only about 70 percent of Egyptians can read, so the pluralists are surely even more outnumbered than this suggests — doesn’t bode well for people hoping for a Western-style liberal democracy there.

From a transition studies approach, I suggested the Egyptian military might not prove loyal to Mubarak if push came to shove. Though Mubarak had lavished resources on the military, he hadn’t taken certain steps to ensure its loyalty (such as that taken by Kuwait, stocking the military’s upper echelons with family members of the leader):

On the other hand, where some countries have bound the military to the regime through patrimonialism—placing relatives and key supporters who have a stake in the regime’s survival in key posts—Egypt’s military is “highly institutionalized” and capable of acting independently. Herb and others agree with Bellin that: “where the coercive apparatus is institutionalized, the security elite have a sense of corporate identity separate from the state. They have a distinct mission and identity and career path. Officers can imagine separation from the state.” O’Donnell and Schmitter find that where the military is professionalized and independent, “the only route to political democracy is a pacific and negotiated one.” It is conceivable (despite the close ties between regime and army) that the military could switch to the opposition or remain neutral during a transition.

In fact, when millions of protesters packed Tahrir Square and other Egyptian streets, the military refused Mubarak’s orders to crack down and ultimately removed him from power. Mohammad Morsi, Mubarak’s democratically elected successor, proved no better at bringing the army to heel and suffered the same fate.

Of course, in order for the military to respond to democratic pressures, there had to be those pressures. I examined two key sectors of Egyptian society that might prove capable of organizing politically to oppose Mubarak (or run a government after his ouster): the secular political parties, and the Muslim Brotherhood.

The former are “largely a sorry bunch” who had been intentionally emasculated by Mubarak:

Saad Eddin Ibrahim, a liberal Egyptian academic and dissident, notes with dismay (in a chapter written from a prison where he was serving a seven-year sentence for opposition activities) that “Egypt’s [secular] democracy advocates are the weakest of the three salient actors at present,” along with the regime and Islamists, because instead of “viewing them as an ally against extremism, the state has repeatedly repressed democracy advocates.” Unless things change drastically, the liberal opposition looks to be an ineffective advocate for democracy.

The Muslim Brotherhood, though banned under Mubarak, were nonetheless popular and organized. Even while officially illegal, members managed to dominate aspects of Egyptian society, often by acting as nominal independents. But the “biggest question with the Brotherhood is not whether they are strong enough to be a credible opposition organization—if they are not, then no one is, and all indications are that they are—but what kind of opposition group they would be.”

On the one hand, the Brotherhood has, since renouncing violence, consistently endorsed democratic principles. Brotherhood rhetoric uses terms like “democracy,” “liberty” and “freedom” “freely and repeatedly,” and the Brotherhood “consistently dismiss the argument that Islam and democracy are incompatible.”

As it turned out, the Brotherhood was not intimately involved in Mubarak’s overthrow, and neither were the secular political parties. His downfall came subject to a massive, unorganized outpouring of support that I did not expect, spurred by an international popular movement. But when examining what came next, as various interest groups tried to organize to control Egyptian democracy, the above paragraphs are still useful. The Muslim Brotherhood, once it made the decision to contest elections, was clearly the dominant group, winning both a large majority in the parliament and the presidency. And Morsi’s rule did indeed “contain many objectionable elements to secular liberals,” which combined with his mismanagement of the economy and the disloyalty of the military contributed to his downfall.

Even if Egypt’s liberals are able to organize effectively, they’ll still be outnumbered. Democratic institutions in Egypt are likely to return Islamist governments. But Egypt does have a solid core of around a third of the population who support democratic values, which is non-negligible and could shape the country’s political future for years to come.