Several weeks ago, while discussing the oncoming winter with my Southern-raised girlfriend, we reached an impasse over what exactly constituted weather cold enough to get alarmed about. Coming from Louisiana, she insisted that anything in even the 40s Fahrenheit was frigid, weather to cause people to stay indoors, bundled up in front of the fireplace. Myself, growing up in bitter Chicago winters, said you can’t start calling weather “cold” until the weather at least falls into the 30s — and that even then, extreme cold doesn’t start until the thermometer falls to the single digits.

But clearly our perspectives were entirely subjective. The only way out of this situation, for any good rationally minded person, is to get more data.

So I went to my Facebook page and posted the following query: 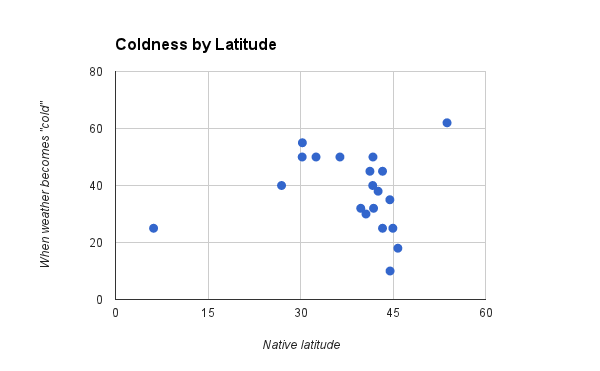 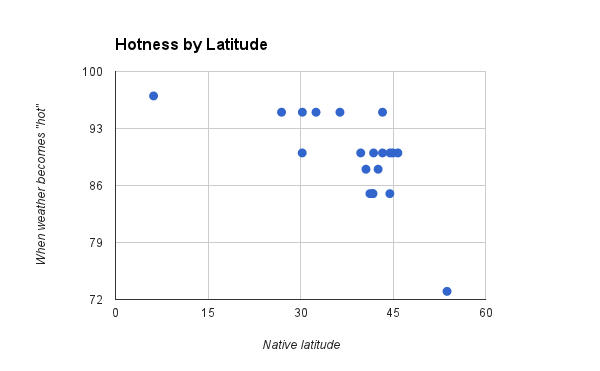 This study didn’t actually end up proving anything or resolving my debate with my girlfriend. (For one thing, I’d prefer to have a sample size of several thousand points, not just a score.) But I had fun doing it, which is really the point of [social] science.

Interestingly, in our conversations, my girlfriend and I have agreed that the extremes aren’t actually where people disagree. That is, when it’s 102, everyone agrees it’s really hot, even if some people are more bothered by it than others. The same when the weather hits single digits — everyone agrees it’s really, uncomfortably cold. The conflicts arise in the middle ground — whether it’s warm enough to open the windows, or cold enough to require a comforter on top of bed sheets.