I didn’t believe it at first when I met Southerners who told me how they were routinely dismissed as unintelligent by Northerners the minute a drawl came out of their mouths — and mocked and infantilized for the same. I had never had that reaction myself, and never heard anyone talking about it.

But these Southerners — some of whom are trying to lose their Southern accents to avoid this situation — aren’t imagining things or being over-sensitive. Multiple studies have looked at identical passages read by people in Southern and “standard” accents and found that listeners rate the person reading in a Southern accent as less intelligent, less wealthy and less educated than the same passage read by a non-Southerner. 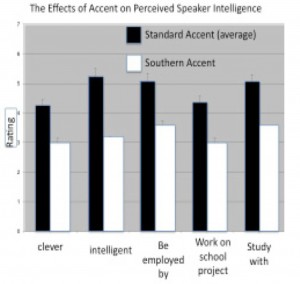 From a study by Taylor Phillips, a student at Stanford University (and a Kentuckian studying in California):

A similar result from a dissertation by Hayley Heaton, a doctoral student at Emory University in Georgia:

What I find most interesting about this is that so many other prejudices about groups of people — or at least negative prejudices — have an air of social unacceptability. But making fun of Southerners as dumb hicks seems to be fair game.

My best hypothesis (unsupported by any data I can find) is that prejudice against Southerners remains acceptable because unlike many other group stereotypes, it’s not tied to any particular racial or ethnic group. It’s taboo today to make fun of someone for their race or ethnicity, which makes stereotypes about people from diverse Northern cities a minefield. (These stereotypes, which do exist, are often good-natured or embraced by their subjects, not imposed by outsiders.) The same would potentially apply to other regions that also aren’t dominated by a single racial or ethnic group, though none come immediately to mind.

As with any analysis of stereotypes, it’s important to be cognizant of conflating effects — perhaps a region is seen as less intelligent because the education system there is poorer? But the fact that a stereotype is on average true of a group doesn’t justify treating individual members of that group as if they conform to that stereotype.

Have other people experienced similar judgements based on region or regional accent? Why do you think these are acceptable when so many other prejudices are not in contemporary America?